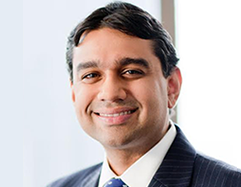 Devindra is the founding member of London House Chambers. He earned his first law degree from the University College London in 1998 and his Masters in International Commercial Arbitration from Cornell Law School in 2001. He attended the Inns of Court School of Law in 1999, where he qualified as a barrister. He is a Guyana Scholar and a Leonard Woolsey Scholar of the Inner Temple.

Dave left London for New York, and there he practiced for 12 years with the AM Law 100 firm, Cozen O’Connor as a partner, resident in their London and New York Offices. At Cozen, he actively litigated cases in jurisdictions throughout the United States, England and the Caribbean, including Guyana and Trinidad, as well as handled complex corporate transactions, before returning to Guyana to establish London House Chambers.

Dave routinely handles a wide spectrum of complex commercial matters in a variety of practice areas, including but not limited to:

Dave has developed the reputation of being a formidable and thorough counsel both in litigation and in complex commercial transaction. He is also a licensed Trademark and Patent Agent in Guyana.

Dave’s wide ranging client-base includes high net worth individuals, banks, real estate developers, civil engineering and architectural firms, and mining and manufacturing companies. He has also represented some of the Caribbean’s most prominent entities, individuals and sportsmen, such as Christopher Gayle and Ramnaresh Sarwan, on matters vital to the development of West Indian cricket.

He sat on the Board of the West Indies Players’ Association (“WIPA”) and was actively involved in developing policy concerning West Indian cricket players. Dave is a regular speaker at the Caribbean Commercial Law Workshop hosted by the University of West Indies Cave Hill Campus, and has established an annual “Kissoon Law Prize” at the Hugh Wooding Law School in Trinidad.

He is one of the only Barristers resident in Guyana who holds a full practicing certificate enabling him to practice in England and Wales as well as being admitted to the Bars of Barbados, Guyana, and New York.

Dave Kissoon of London House Chambers acts for local clients as well as international clients investing in Guyana. He is especially active handling corporate finance and M&A matters and has experience practising law in both the USA and England. Sources say: “His tenacity and relentlessness in pursuing the interests of his clients has earned him a very successful practice.”